Our story begins in 1920 in a little Italian town called Davoli, which is in the province of Calabria (the toe of the boot!). There, a would-be soap maker by the name of Giuseppe Visconti was eating his basket lunch while sitting on the remains of a Roman pillar that was part of the ruins of a nearby amphitheater.

Visconti's hands were greasy due to the leftover lamb chop he was eating, and a thought entered his head...what kind of soap would a Roman have used centuries before?

Visconti already knew about Castille soap (that is, soaps made using olive oil as a base), and these kinds of soaps were very common in Calabria. But he was certain that the Romans would have used something different, something more...advanced for their time.

And he was right. After spending nearly a decade researching Roman soap formulations, Visconti came up with his first batch of soap...and he saw that it was good.... 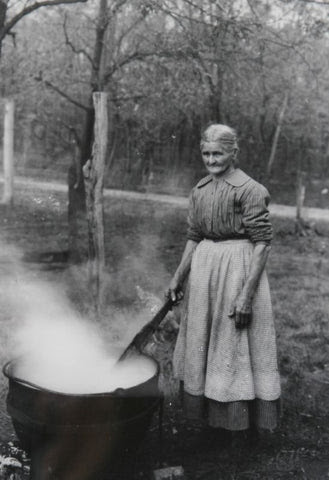 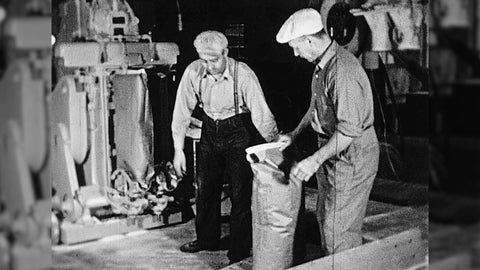 Giuseppe and his brother Fiore mix his proprietary soap ingredients

By all accounts, Visconti's first batch of soap was a resounding success; once the soap had hardened, he loaded his first batch of 400 bars into his mule cart, took it to the weekly farmer's market in town, and promptly sold out of every single one of them.

People were captivated by the natural fragrances in Visconti's soap (his first batch was made from lavender essential oils), and his soap was well liked and highly sought after because it left no greasy residue, was wonderfully (but not overpoweringly) fragrant, and was made with locally sourced ingredients.

And the rest, they say, is history.

Shortly after the War, Visconti moved his operation to the United States, and our soaps have been made near Portland, Oregon ever since!

Today, we still use Visconti's exclusive formulations, and we still make things the way Giuseppe would have wanted - pure, natural, made from wholesome ingredients, and true to the formulations the ancient Romans would have used.

Join us and get nice things